Welcome to the June edition of Threat Modeling Insider in 2022!

“We need an army of threat modelers”

Interview with a specialist in security regulations for medical devices, Seth Carmody

Threat modeling is gradually finding its way in the R&D processes of medical devices, with the FDA being one of the main driving forces. We had a conversation with Seth Carmody, Vice President of Regulatory Strategy at MedCrypt and former Cybersecurity Program Manager, Medical Devices at FDA.

Can you describe your background and how you got into medical device cybersecurity?

“I studied organic chemistry in graduate school, which prepared me well for an opportunity at FDA to work in diabetes devices.  Part of my role at FDA was to review software for these medical devices.

In 2013, a security researcher submitted their research to us; this research included hundreds of devices. In that time the Center for devices, had no mechanisms, policies, let alone expertise to deal with this information. The group charged with the task of dealing with all the research information came to me and said, ‘Hey Seth, you like software, don’t you?’, and handed me the files. That launched me into an incident response role which evolved to include technology policy so that we could get ahead of post-market issues.  It’s through these roles that I picked up a lot of knowledge about cybersecurity for medical devices.”

What is your experience with threat modeling?

“As a practitioner, very little. However, the advantage of not being a specialist is that you are able to see the big picture about how threat modeling fits within the existing medical device regulation. I remember the conversations with experts in 2014 about how threat modeling was going to be important. If you look to the FDA postmarket guidance that was finalized in 2016, you will find in the appendix a section on threat modeling. At the time my conception of where it would fit in the world was not really solidified.

In the 2018 draft premarket guidance and the re-release of that draft in 2022, you see that threat modeling is taking on an increasingly important role, as the driving force for everything else regarding medical device security. That has been my evolution as a policy writer. You feel something is important, but you do not know where it exactly fits and how important it will be, but gradually you learn by observation and from other experts where it fits.  Threat modeling has really become the security risk assessment staple.”

What is the relation between threat modeling and other security activities as part of the FDA guidance?

Another important pillar is making clear what the value of threat modeling is for the business. It is the main struggle that security specialists are dealing with. Some medical device manufacturers ask themselves why they should take the effort and how it will benefit the business. We must make it clear that, although it might be an extra cost in the development stage, it will pay off later on, in terms of reputational savings and forced redesigns in the future.”

What is your prediction for the final version of the FDA Guidance on Cybersecurity in Medical Devices and when will it become “active”?

“The draft was finalized in 2022 and the commenting period ends in the beginning of July. It will take a month or two for the internal team at FDA to process all the comments and alter the document where needed. It will go through different layers of review before it is passed to the official guidance clearance process. That will be sometime around the fourth quarter of this year.
The final approval process takes up another nine months. So, we are looking at Q3 of 2023.
However, some things can influence the timeframe.

During covid the health care sector was mainly focused on fighting the pandemic, leaving fewer resources in commenting, editing and approving guidance documents. So, things like that delay the whole process dramatically.There are also other factors that can compress the approval period. If the U.S. President or the US FDA Commissioner, Robert Califf, state that the policy is important to get out, it can move a lot faster. If the Commissioner expedites the clearance process, we could see it finalized in October 2022, if not I would say Q1 of 2023.

You are a contributor and bootcamp facilitator of the MDIC – Playbook for Threat Modeling Medical Devices. What is your take-away from this?

“The playbook was co-built by lots of industry experts, but primarily facilitated by the MDIC (Medical Device Innovation Consortium), MITRE, and FDA. MDIC is a consortium that is funded by the industry, working on industry-wide problems. For me it was obvious that threat modeling is one of those industry-wide problems that needs an industry-level effort.
We launched a project with different stakeholders and manufacturers with the aim to make a playbook, with examples, that help people through the threat modeling process.
The takeaway from it is twofold.

The MDIC Playbook is a good start in terms of rallying different stakeholders around the issue of threat modeling and working through some of the issues. The goal is to raise the bar a little bit and try to pass through the built-up knowledge to the rest of the industry.”

What is your recommendation for any medical device manufacturer who considers a pre-market submission?

“There are a few factors that contribute to what I would call the uncertainty for anyone who is looking to submit.

First, the 2022 guidance is in draft and not for implementation. So technically, the only guidance that is valid for implementation is the 2014 version, which is solid, but insufficient. The catastrophic impact of cybersecurity issues which we have seen recently – think WannaCry – tells us that we cannot wait to start implementing threat modeling.

I would recommend medical device manufacturers to always do a pre-submission. It’s a cost-free submission to the FDA to ask any question you want. You can send in your threat model, ask questions, and get feedback. Or just ask them what they expect in terms of threat modeling. That way you get information before you submit.

If you submit and the FDA tells you they need a threat model, you will have to dive in. Luckily, that does not have to be complicated. With the right focus and the right people, you will arrive at something that will hit all the major risks and cover them in a reasonably short time. It is a continuous process, but you can start pretty easily, and you will get something that will be submittable to the FDA.”

How can we make threat modeling more effective for a medical device development team?

“As said before: we need more threat modelers, so a training that is focused on the medical device space would benefit the industry greatly. And for that, we can draw on training that is already built.

Secondly, the value of threat modeling should be articulated. We have to come to a point where medical device developers automatically say: ‘We need security controls here, here, and here. How do we do it? What will it cost? How much time will it take to implement?’ These are all important questions for the business that are trying to meet market demands.”

Book your seat in our Threat Modeling Medical Devices Course!

Learn how you can leverage your threat model in multiple other aspects of your regulatory submission, allowing you to focus on addressing any issues rather than assembling a multitude of different documents.

Every medical device needs a threat modeler, but not every threat modeler needs to be a cybersecurity specialist. Through our training every participant will walk away with both knowledge about threat models, how to assemble a team and conduct a session as well as all of the materials to do that the very next day.

Do you have experience with LINDDUN GO, an approach for Privacy Threat Modeling? And/or are you working with AI/ML and are you interested in privacy by design and responsible AI? Then you will love Plot4.ai! Plot4ai is an adaption of LINDDUN, focused on artificial intelligence and machine learning. It has been created by Isabel Barbará and it contains 86 threats, divided over 8 categories. 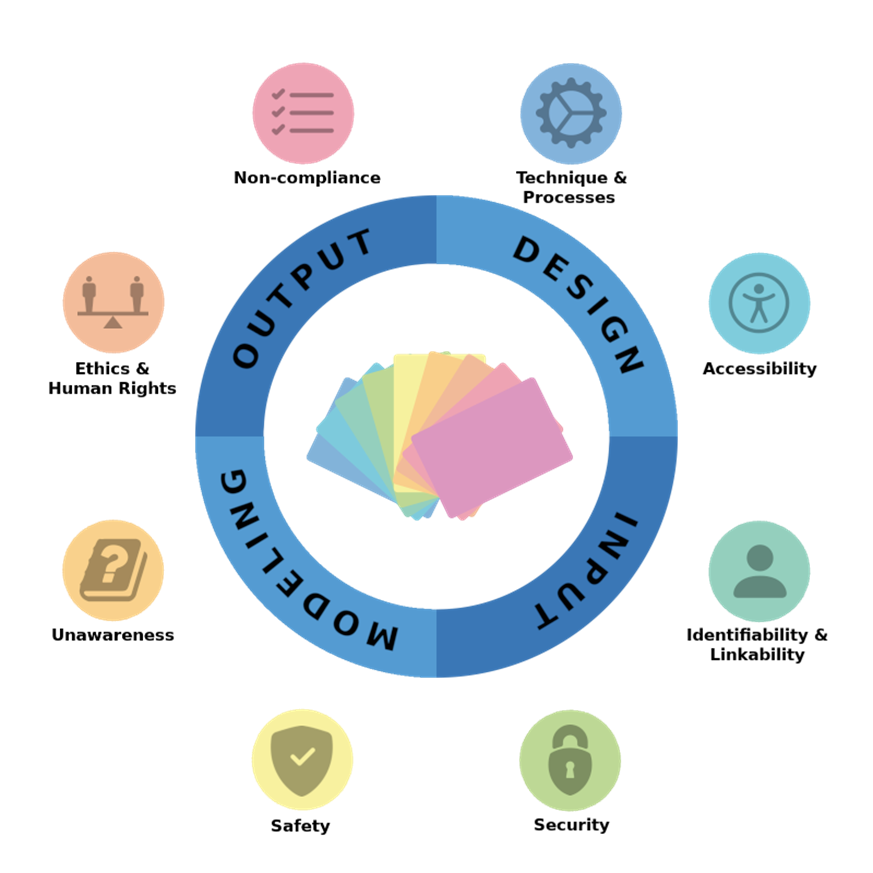 You can contribute by giving feedback on the content or sending input for new threats via GitHub. Furthermore, if there is enough interest, PLOT4ai will be taken to the next level, and it will be continued as a community driven project.

As fans of the Application Security Podcast show, we can only but recommend the latest episode on Threat Modeling. In this episode hosts Chris Romeo and Robert Hurlbut talk with Kristen Tan and Vaibhav Garg. They wrote a paper called “An Analysis of Open-source Automated Threat Modeling Tools and Their Extensibility from Security into Privacy”. In the paper and during the show they explain their quest on ways to threat model not only faster (automated) but also better.

You can find the show on your favorite podcast platform.

In our previous article, we discussed the differences between Threat Modeling and penetration testing when it comes to timing, objectives and outcome. In short, they are two different animals. But we also said that there is a place for both techniques. They are both valuable tools in your security toolbox. Even more, creating a Threat Model before performing a penetration test, will greatly improve the quality of your test. Read all about it here.

This is the fourth post in our series about Threat Modeling. The series is meant to provide basic information about the practice of Threat Modeling, why we love it and how it can make your organization more secure.

When does a user story warrant a threat model update?

Let’s assume there is an agile development team (SCRUM) that already has an up-to-date threat model. What will typically happen?

However, this process does not yet show how and/or when a user story will vindicate an actual update of the threat model. This is a little bit more difficult to capture in hard rules. But here are our guidelines.

So, update your threat model when in the user story:

Lastly, when the functionality is just extended an update is possible, but often not required.

We aim to make this a community-driven newsletter and welcome your input or feedback. If you have content or pointers for the next edition, please share them with us.

Book a seat in our upcoming trainings

We also organize in-company training for groups as of 10 participants.